Mark Williams-Thomas, ex-Surrey Police Constable - Bringing the Force, and the Service, into Disrepute 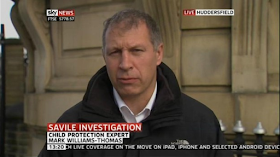 Snipped from a letter CMOMM sent in 2013:

Bringing the Force, and the Service, into Disrepute.

Mark Williams-Thomas’  name crops up in various places.  He bills himself as an “expert in Child abuse”, and refers back to his service in the Surrey Police, when it seems he was a DC for a short time and a Family Liaison Officer, also for a short time. [3]

It is recorded that he was prosecuted for Blackmail, one assumes by Surrey Officers, and although acquitted left the Force in 1990 under circumstances which he has never explained.  From what we can gather he completed only 11 or 12 years service.  Strangely he claims to have been re-employed by Surrey Police as a DC for one year in 2009, and also claims to have worked whilst in the police on child protection variously for 12 years, and for 20 years.  [1]  [2]  [3]  [4]  [5]

He previously claimed that he single-handedly brought the Savile case to the notice of the public. He has pontificated on several other cases and has said that he is engaged in viewing Child Pornography on the internet “for research purposes”.   He has not made it clear that he is among the persons authorised to do so.   [5]

But one of his more damaging claims is that whilst he was in Surrey Police he ‘led’ a number of murder and national paedophile investigations. [3]   [6]

Surrey, like all other forces, operates along ACPO guidelines for the investigation of serious crime, allocating even “simple”  murders to DI or DCI, overseen by Det Supt, and that a National Paedophile enquiry would be co-ordinated by the DChSupt, reporting to the ACC Crime and would be on a joint Inter-force Liaison group specially set up for the purpose.

For Mark Williams-Thomas to represent that he, as a junior DC personally ”led” such enquires must cause the general public of Surrey to doubt whether they have been given a proper professional service.  This is potentially damaging for the image of Surrey Police and of the Service as a whole.

Whilst anyone is entitled to carve out a professional life after retirement or resignation, and fantasists may not commit offences by their statements - unless thereby they obtain pecuniary advantage -  his activities seem to be beyond acceptable, and it may be that the Surrey police should be invited to consider issuing some form of explanatory statement, perhaps in the form of a Press release, to be used at the appropriate moments, in which the true facts about his service and real experience were set out.  [7]

It cannot be in the public interest, especially in the currently extremely sensitive areas of child sexual abuse and paedophilia, for a person to make bogus claims about his expertise, based on a series of false statements about his service as a Surrey Police Officer.

"As a police officer I worked in the area of child protection for 20 years".

Let us look at just one of those who has driven the hysteria over Sir James Savile and who claims he "exposed " the truth in his TV tabloid show "Exposure" when what he actually did was present a series of claims.
Mark Williams-Thomas is described repeatedly as a "child protection expert". Even Australia's respected ABC program 4 Corners introduced him as such.
He has no justification for making the claim and offering himself up as an expert on how to protect children.
The truth about Mark Williams-Thomas is this  he was a uniformed police officer on the beat for 9 years with the Surrey Police.
He graduated to Detective Constable - a role he held for only nine months before he left the Surrey Police under unexplained circumstances.
No detective constable in any police force around the world conducts police investigations. Rather they are part of a team with an Inspector (at the least) overseeing an inquiry. A DC could be answering phones, chasing up addresses, sitting in a car with another officer watching a suspect.
Yet the media has blithely accepted Williams-Thomas exaggerated claim that implies he was a major investigator on a number of important cases including the jailing of celebrity Jonathan King who oddly, was not the subject of any investigation until after Williams-Thomas left the force.
It would be prudent not to ask Williams-Thomas former colleagues at the Surrey Police what they think of him taking all the credit for the team's hard work.
This eight-month former DC then popped up with a company "advising' on child protection, a subject of which he had no specific knowledge of apart from his own self appointed, non-existent qualifications.
Two companies he set up were closed down.

"Bringing with him his wealth of experience as hands on former Detective, Mark Williams-Thomas is able to provide a new dimension to many of the criminological problems facing today's society – for example, how the police investigate major crime and the risk management of sex offenders in the community.”   His expertise includes in particular risk management and assessment of offenders and he now owns his own Child Protection and Risk Management Consultancy - WT Associates Ltd. Prior to setting up WT Associates in 2005, Mark was a police Detective specialising in major crime. He worked on or was in charge of some of the largest paedophile and murder investigations in the country, as well as being was one of only 10 specialist Family Liaison officers during his time in the police. Mark is also completing a Masters in Criminology at the University of Central England."

He began his police career in Surrey in 1989, where he was a detective and family liaison officer. He launched the high-profile investigation into the singer and record and TV producer Jonathan King in 2000, leading to his conviction in 2001 for abusing boys, and led a local inquiry into paedophilia.
Williams-Thomas has described himself as a "doer" during his 11 years in the force and was once told by a superior that he was a "nightmare to manage".

I've spent the past 18 months shadowing the officers of Scotland Yard's Paedophile Unit and, despite being a former detective with more than 12 years of experience in child protection, I've been horrified by what I've seen.
It's not just the appalling nature of the photographic images that so alarms me; it's the number of them.

7 http://www.williams-thomas.co.uk
Mark Williams Thomas (M.A) - TV Presenter, Criminologist & Child Protection Expert
Mark is a former police detective who has far-reaching experience of working at the centre of high profile investigations.
During Mark's police service, he specialised in child protection and major crime and he is renowned throughout the UK's police forces as well as the national media for his expertise in these areas.